“Cast it” is a periodical publication composed in CAST characters. Issue 3 offers the transcription of Der Schriftgiesser together with its English translation.

Der Schriftgiesser (The typefounder) is a description of the casting of typefaces included in Werkstäte der heutigen Künste oder die neue Kunsthistorie, a kind of encyclopaedia of trades, originally published in Leipzig between 1761 and 1779. The author, Johann Samuel Halle (1727-1810), was a Prussian academic and official. His description of the type production process is probably the first detailed text on the subject written in German by an author who was neither a printer nor an entrepreneur in the industry.

In 1922, the Wilhelm Woellmer type foundry in Berlin republished the text of ‘Der Schriftgiesser’ as a souvenir of the annual meeting of German type foundries. Thanks to Dan Reynolds, we now have for the first time an English translation of Halle’s text. The piece is accompanied by a preface that is also the only commentary on its contents ever published so far. 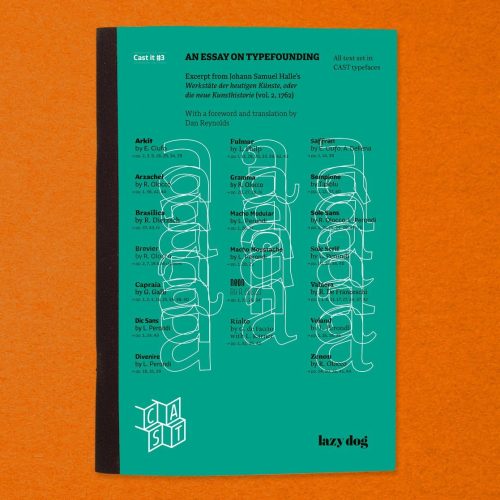