“Cast it” is a publication typeset in CAST fonts. Number 2 publishes, as a sample text, the first two chapters of The printer’s grammar, a manual for typesetters written and published by John Smith in London in 1755.

As James Mosley notes in his preface, Smith often refers to Moxxon and his Mechanick exercises (1683-1684), but unlike most manuals of the time he does not rely on it. From several passages in The printer’s grammar (some of which can be found in these excerpts), it is evident that Smith had learnt his trade as a typographer in Germany and was also familiar with French and Dutch practices. In short, he was an entrepreneur and European citizen ante litteram.

CAST is a digital type foundry that shares Smith’s entrepreneurial and cosmopolitan spirit by promoting international debate on typographic issues. In addition to “Cast it”, CAST publishes articles on the science, history and culture of type on its website. 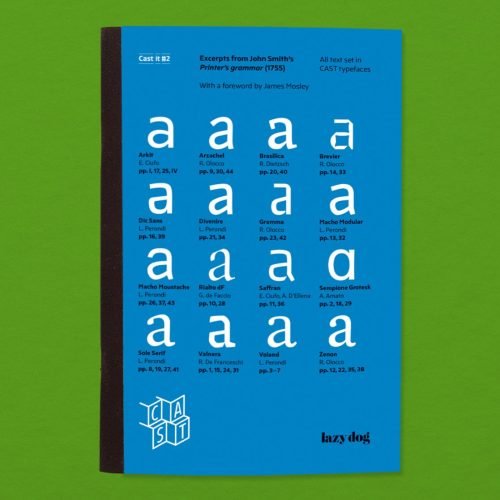